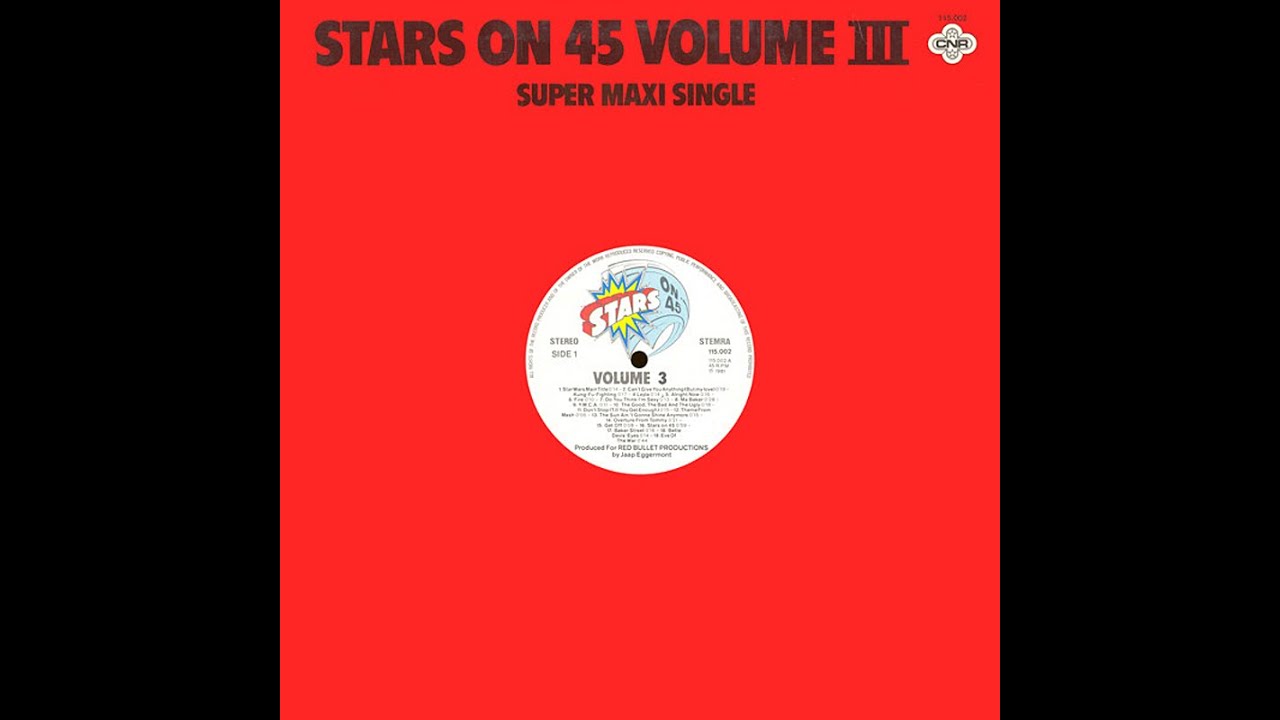 Have a listen to the ORIGINAL bootleg that got this trend started
I know this is incredibly lazy of me, but I just had to do this one for the fun of it, we could really use that right now. These tracks were really hot during the summer and fall of 1981 when megamixes were new and really hot. A total of 3 12 single only releases, 20 mins + of Stars On 45 Megamix Megamix featuring the Beatles, Abba and a lot of unexpected surprises of songs you probably love. Back in the early 80’s there was this phenomenal DJ mixed bootleg megamix that used clips of original disco and pop songs and at the centrepiece was the use of Beatles hit singles with a heavy disco back beat behind it. It used just about every popular disco song up to that point, but the most interesting part of the mix was when “Funkytown” came up and in a flash of brilliance, the DJ inserted “Boogie Nights” two word refrain where the guitar lick should have been and that hooked me. Then its a rapid fire 60’s revival starting with the guitar line from Shocking Blue’s “Venus” and then the short run of Beatles hits. The Stars On 45 hits were the result of revenge by the producer and copyright holder of the recorded performance of Shocking Blues #1 hit “Venus” who felt cheated on the royalties and created the band to recoup his losses. I own a copy of that bootleg disco mixer that was sold to me from under the counter at the Entrepot Du Son (now defunct) in Quebec City. It’s pretty amazing and stirred up the dance floor in a way one song could not, and I knew it was a sign that the DJ was getting out of the booth for a bit since it ran for a little over 16 minutes. The copyright holder contacted producer Jaap Eggermont, who was honing his craft with these types of medleys. Eggermont chose a few songs from that bootleg and made the Beatles the focus of the 12″ only release. He assembled four Dutch singers who closely resembled the Fab Four and had them record the songs first and then put them to the bare bones disco beat. Now this was in the day before computers simplified production and we were working with reel to reel tape, editing by using a white grease pencil to diagonally cut the tape to create the edits and then taping the backs together. That is really hardcore old skool! The song went #1 in Holland, spread to Europe, then it conquered the world. I have about 15 completely different bootleg megamixes. Here I have assembled the original Beatles mix, along with two special 12′ releases, the first features the ABBA megamix and the second was the Stars On 45 III that contains clips from “Star Wars”, “Kung Fu Fighting”, “Layla”, “All Right Now”, “Fire” and a bunch of other unexpected pleasures. Again, yeah this is lazy of me, but I’m going to use it for my cardio tomorrow morning.