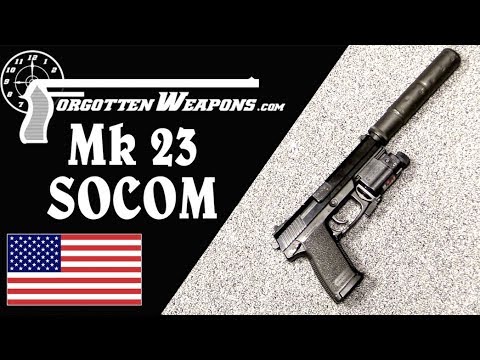 The H&K Mk 23 pistol was developed in the 1990s for the US Special Operations Command and US Navy. The goal was to produce an “offensive handgun” that could serve as a primary armament for a special forces operator as well as a backup arm. It was required to be no more than 12 inches long, fit a suppressor and aiming module with laser and illumination options in both visible and IR spectrum, have at least 10-round magazines, chamber .45 ACP (specifically a 185gr +P loading), and pass a 30,000 round endurance test.

Only two companies were able to supply acceptable initial pistols; H&K and Colt. The Colt pistol failed to pass the 1st phase testing. H&K presented a gun based on the recently-developed USP design, was ultimately chosen as the project winner; adopted as the Mk 23 pistol in 1996. The testing this pistol went through during development is really quite remarkable.